What do Umrah Pilgrims do & How they perform Umrah? 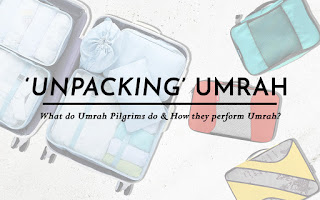 Haram comes from the root word ‘haruma-yahrumu’ which takes the meaning of forbidden – forbidden to do something or for something to be done to it. There are two sites that are unchallengably the highest of them all – the Masjidil Haram or Grand Mosque in Makkah and the Masjidil Nabawior Prophet’s Mosque in Madinah.

Allah swt has promised that for every good deed or prayer performed within the Haram vicinity, He multiplies the reward 100,000. Who wouldn’t want that?

Performing the Umrah is not as complicated as most first-time pilgrims think it to be. Allow me to break it down into steps:

Ihram is a state of mind that you are going to perform the Umrah and you are required to oblige by certain rules. The rules are different for men and women:

These list is not exhaustive. Therefore, I strongly suggest the pilgrim to attend lessons conducted by the GSA (tour agent) to ensure that what is taught is align with the pilgrim’s beliefs.

Being in a state of wudhu’ is an obligation for Tawaf. Performing the Tawaf is akin to being in prayer. A pilgrim faces the Hajar Aswad, lifts both hands and says “Bismillahi, Allahu Akhbar”, ensuring the Kaabah is on his left. He then continues making his round around the Kaabah, raising his hand once again at Rukun Yemen. At the Rukun Yemeni (or Yemeni Corner), the pilgrim should recite:

[Our Lord! Give us that which is good in this world and in the Hereafter, and save us from the torment of the Fire.] 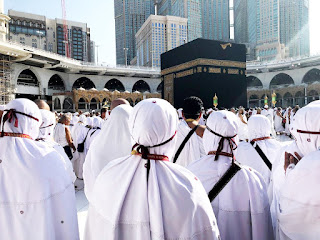 This act of circumambulation is repeated seven times.

It is the Sunnah for the man during this Tawaf for Umrah to place one side of his Ihram garment under his right arm, thus exposing his right shoulder and arm, whilst keeping the left covered – and placing the excess cloth over the left shoulder.

Upon completing the Tawaf, the pilgrim will make his way away from the Kaabah and find a spot to perform the sunnah prayers. This Sunnah prayer is to be done right after the Tawaf.

After performing the prayer, the pilgrim looks for the barrels of Zam Zam water and drinks it – facing the Kaabah while standing.

The Prophet (ﷺ) said: “ZamZam is for whatever one drinks it for.”

In narration, he said: “It (ZamZam) is blessed. It is a nourishment that nourishes, and a cure that remedies.” He also added, “(ZamZam) is the best water upon the face of the earth.”

Right after drinking ZamZam, the pilgrim makes his way to Mount Safa for the next ritual which is the Sa’ie. At Mount Safe, he will try to see the Kaabah [if possible], raises his hands and praises Allah and glorifies Him as the Prophet (ﷺ) would while saying:

The circuit from Mount Safā to Mount Marwah is one circuit and from Marwah to Safā is two, then back to Marwah is three. It is a must that seven circuits are completed. If done correctly, one will always finish at Mount Marwah. By reaching Mount Marwah, the Sa’ee is completed.

Whilst walking between Mount Safā and Marwah, he may recite whatever he wishes from dhikr, du’ā and Quran.

Once the seven circuits of the Sa’ie have been completed, a man must either shaveor trim his hair, and shaving is preferable for the man. As for the woman, then she must shorten her hair and not shave her head.

By performing the tahalul rites, a pilgrim has completed his Umrah and is free from the prohibitions of the ihram.